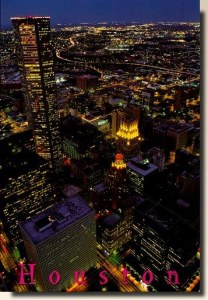 A postcard from Houston (Beth)

Houston was founded in 1836 on land near the banks of Buffalo Bayou. It was incorporated as a city on June 5, 1837, and named after then-President of the Republic of Texas—former General Sam Houston—who had commanded at the Battle of San Jacinto, which took place 25 miles (40 km) east of where the city was established. The burgeoning port and railroad industry, combined with oil discovery in 1901, has induced continual surges in the city's population. In the mid-twentieth century, Houston became the home of the Texas Medical Center—the world's largest concentration of healthcare and research institutions—and NASA's Johnson Space Center, where the Mission Control Center is located.