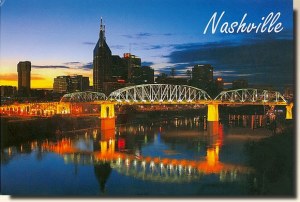 A postcard from Nashville, TN (Teresa)

Nashville is the capital of the U.S. state of Tennessee and the county seat of Davidson County. Nashville was founded by James Robertson, John Donelson, and a party of Wataugans in 1779, and was originally called Fort Nashborough, after the American Revolutionary War hero Francis Nash. Nashville quickly grew because of its strategic location, accessibility as a river port, and its later status as a major railroad center. In 1806, Nashville was incorporated as a city and became the county seat of Davidson County, Tennessee. In 1843, the city was named the permanent capital of the state of Tennessee. It is most notably known as a center of the music industry, earning it the nickname "Music City".