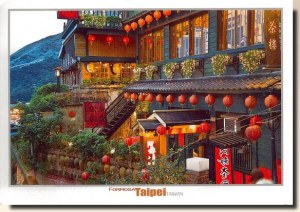 A postcard from Taipei (Huan Yue)

Taipei County is located in northern Taiwan. The area borders Yilan to its east, Keelung on the north and Taoyuan on the south. The county surrounds but does not include Taipei City, which is a direct-controlled municipality. Currently administered as a county of Taiwan Province of the Republic of China, Taipei County is due to become a direct-controlled municipality in its own right on December 25, 2010. County officials have chosen X?nb?i Shà¬; literally "new north city" as the official Chinese name for this new entity. The official rendering of this name in English is New Taipei City [wikipedia].