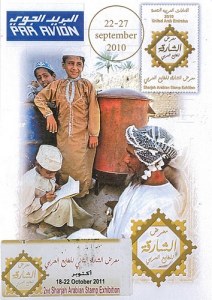 A postcard from Sharjah (M.Nidham)

Historically, Sharjah was one of the wealthiest towns in this region with a settlement in existence for over 5000 years. In the early 18th century Al Qasimi clan established itself in Sharjah, c. 1727 declaring Sharjah independent. On 8 January 1820, Sheikh Sultan I signed the General Maritime Treaty with Britain, accepting a protectorate to keep the Ottoman Turks out. Like four of its neighbours, Ajman, Dubai, Ras al-Khaimah, and Umm al-Qaiwain, its position on the route to India made it important enough to be recognized as a salute state. On 2 December 1971, Sheikh Khalid III joined the United Arab Emirates.