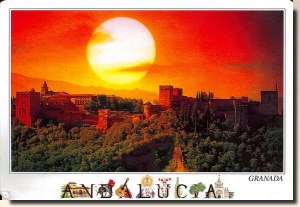 A postcard from San Roque (Carmen)

The Alhambra (literally "the red one"), the complete form of which was Calat Alhambra ( "the red fortress"), is a palace and fortress complex constructed during the mid 14th century by the Moorish rulers of the Emirate of Granada in Al-Andalus, occupying a hilly terrace on the southeastern border of the city of Granada, now in the autonomous community of Andalusia, Spain.