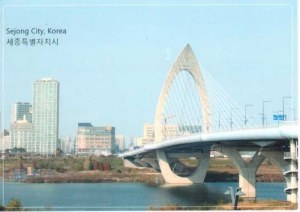 A postcard from Sejong

About this postcard
Sejong is a special self-governing city and de facto administrative capital of South Korea. Sejong was founded in 2007 as the new planned capital of South Korea from many parts of the South Chungcheong province and some parts of North Chungcheong province to ease congestion in South Korea's current capital and largest city, Seoul, and encourage investment in the country's central region. Sejong was named in honor of King Sejong the Great, the fourth king of the Joseon Dynasty and creator of the Korean alphabet, Hangul. The city was formed by combining Yeongi County, the county of South Chungcheong Province from which the majority of the city's territory was ceded, and other counties.