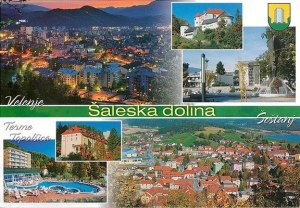 A postcard from Sostanj (Semir)

Šoštanj is a town and municipality in northern Slovenia. It was first mentioned in written documents dating to around 1200 as Schönstein in relation to its castle. As a market town it was first mentioned in 1348. It was given town status in 1919 and until the 1960s was the center of the Šalek Valley. In 1963 nearby Velenje became the administrative center. Šoštanj again became a municipal center in the late 1990s. The town has a long leather-working history, with industrial-scale activity going back to 1788. The factory was owned by the Woschnagg family, a Germanized branch of the Vošnjak family, until it was nationalized in 1945. The processing factory was closed down in 1999. A leather industry museum is now open in the town.