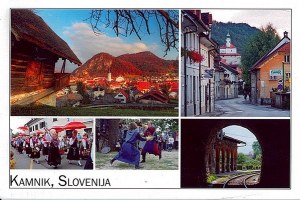 A postcard from Kamnik (Karmen)

The name Kamnik was first mentioned in the 11th century. The first time it was mentioned as a town was in 1229, when it was an important trading post on the road between Ljubljana andCelje. This makes the town one of the oldest in Slovenia. In the Middle Ages, Kamnik had its own mint and some aristocratic families among its residents. The town was among the most influential centers of power for the Bavarian counts of Andechs in the region of Carniola at the time. The only remnant of the Bavarian nobility are the two ruined castles which are both strategically built on high ground near the town center. The Franciscan monastery built in the town itself is a testament to its importance. The building is well preserved and has undergone extensive renovation in recent years.