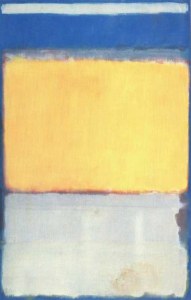 A postcard from Singapore (Tan)

About this postcard
Mark Rothko, born Markus Yakovlevich Rothkowitz, was an American abstract painter of Latvian Jewish descent. He is best known for his color field paintings that depicted irregular and painterly rectangular regions of color, which he produced from 1949 to 1970. Although Rothko did not personally subscribe to any one school, he is associated with the American Abstract Expressionist movement of modern art. Originally emigrating to Portland, Oregon from Russia with his family, Rothko later moved to New York City where his youthful period of artistic production dealt primarily with urban scenery. In response to World War II, Rothko's art entered a transitional phase during the 1940s, where he experimented with mythological themes and Surrealism to express tragedy. Toward the end of the decade Rothko painted canvases with regions of pure color which he further abstracted into rectangular color forms, the idiom he would use for the rest of his life.