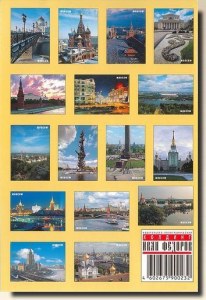 A set of postcards from Moscow (Elvira 4/5)

Moscow is a major economic centre and is home to one of the largest numbers of billionaires in the world; in 2008 Moscow was named the world's most expensive city for foreign employees for the third year in a row. However, in 2009, Moscow moved to third after Tokyo and Osaka came in first and second, respectively. It is home to many scientific and educational institutions, as well as numerous sport facilities. It possesses a complex transport system, that includes 3 international airports, 9 railroad terminals, and the world's second busiest (after Tokyo) metro system which is famous for its architecture and artwork. Its metro is the busiest single-operator subway in the world. Over time, the city has earned a variety of nicknames, most referring to its pre-eminent status in the nation: The Third Rome (?????? ???), Whitestone (????????????), The First Throne (????????????????), The Forty Forties (????? ???????.) [wikipedia].