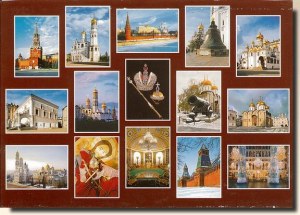 A set of postcards from Moscow (Elvira 2/5)

Kremlin (??????) is the Russian word for "fortress", "citadel" or "castle" and refers to any major fortified central complex found in historic Russian cities. This word is often used to refer to the best-known one, the Moscow Kremlin, or metonymically to the government that is based there. Outside Russia, the name "Kremlin" is sometimes mistakenly thought of as being Saint Basil's Cathedral because of its distinctive environment, although this is not a part of the Moscow Kremlin [wikipedia].