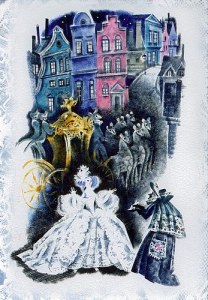 A postcard from Yoshkar-Ola (Anna)

Yoshkar-Ola is the capital city of the Mari El Republic, Russia.  Yoshkar-Ola means red city in Mari. The current name is the third to have been given to the city. The city was known as Tsaryovokokshaysk before 1919 and as Krasnokokshaysk between 1919 and 1927. These names were derived from the name of the Malaya Kokshaga River, which runs through the city. During the Soviet era, especially after World War II, the city was a regional industrial and transport center and grew to its current size. The collapse of the Soviet Union removed support for state enterprises, and led to the shutdown of most manufacturing activity in the area. Much of the city's economic activity was supported by shuttle traders who would transport (oftencounterfeit) goods from the bustling markets of Moscow to Yoshkar-Ola's bazaars. The sharp decline in living standards led to the emigration of specialized professionals to larger cities in Russia.