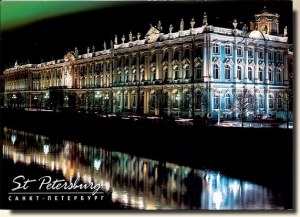 A postcard from Saint-Petersburg (Maria)

The Palace Embankment or Palace Quay is a street along the Neva River in Central Saint Petersburg which contains the complex of the Hermitage Museum buildings, including the Winter Palace, the Hermitage Theatre, the Marble Palace and the Summer Garden. The street was laid out between 1763 and 1767, when it used to be a preferred place of residence for the Russian Imperial Nobility. The street begins at the Palace Bridge, where the Admiralty Embankment becomes the Palace Embankment, and the street ends at the Fontanka, where it becomes the Kutuzov Embankment.