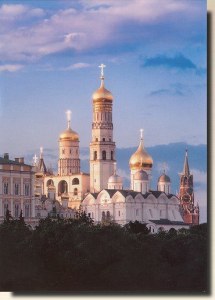 A postcard from Moscow (Igor)

Moscow is the capital and the largest city of Russia. It is also the largest metropolitan area in Europe, and ranks among the largest urban areas in the world. Moscow is a major political, economic, cultural, religious, financial, educational, and transportation centre of Russia and the world, a global city. It is also the seventh largest city proper in the world, a megacity. The population of Moscow (as of 1 June 2009) is 10,524,400. It is located on the Moskva River in the Central Federal District, in the European part of Russia. Moscow sits on the junction of three geological platforms. Historically, it was the capital of the former Soviet Union, Tsardom of Russia and the Grand Duchy of Moscow. It is the site of the Moscow Kremlin, one of the World Heritage Sites in the city, which serves as the residence of the President of Russia. The Russian parliament (the State Duma and the Federation Council) and the Government of Russia also sit in Moscow [wikipedia].