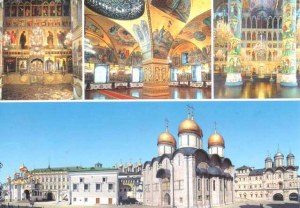 A postcard from Moscow (Amarance)

About this postcard
The Cathedral of the Dormition is a Russian Orthodox church dedicated to the Dormition of the Theotokos. It is located on the north side of Cathedral Square of the Moscow Kremlin in Russia, where a narrow alley separates the north from the Patriarch's Palace with the Twelve Apostles Church. Southwest is Ivan the Great Bell Tower. Separately in the southwest, also separated by a narrow passage from the church, is the Palace of Facets. The Cathedral is regarded as the mother church of Muscovite Russia. In its present form it was constructed between 1475–79 at the behest of the Moscow Grand Duke Ivan III by the Italian architect Aristotele Fioravanti. From 1547 to 1896 it is where the Coronation of the Russian monarch was held. In addition, it is the burial place for most of the Moscow Metropolitans and Patriarchs of the Russian Orthodox Church.