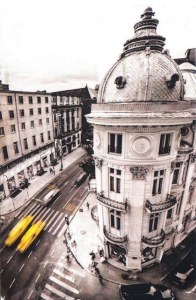 A postcard from Bucharest (Florian)

Bucharest was first mentioned in documents in 1459. It became the capital of Romania in 1862 and is the centre of Romanian media, culture and art. Its architecture is a mix of historical (neo-classical), interbellum (Bauhaus and art deco), communist-era and modern. In the period between the two World Wars, the city's elegant architecture and the sophistication of its elite earned Bucharest the nickname of "Little Paris" (Micul Paris).