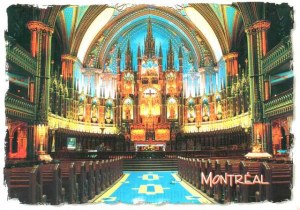 A postcard from Montreal (Alice)

About this postcard
Notre-Dame Basilica is a basilica in the historic district of Old Montreal, in Montreal, Quebec, Canada. The interior of the church is amongst the most dramatic in the world and regarded as a masterpiece of Gothic Revival architecture. The vaults are coloured deep blue and decorated with golden stars, and the rest of the sanctuary is decorated in blues, azures, reds, purples, silver, and gold. It is filled with hundreds of intricate wooden carvings and several religious statues. Unusual for a church, the stained glass windows along the walls of the sanctuary do not depict biblical scenes, but rather scenes from the religious history of Montreal. It also has a Casavant Frères pipe organ, dated 1891, which comprises four keyboards, 92 stops using electropneumatic action and an adjustable combination system, 7000 individual pipes and a pedal board. Approximately 11 million people visit Notre-Dame Basilica every year, making it one of the most visited monuments in North America.