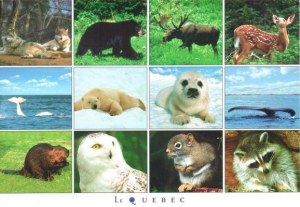 A postcard from Montreal

About this postcard
The large land wildlife is mainly composed of the white-tailed deer, the moose, the muskox, the caribou, the American black bear and the polar bear. The average land wildlife includes the cougar, the coyote, the eastern wolf, the bobcat, the Arctic fox, the fox, etc. The small animals seen most commonly include the eastern grey squirrel, the snowshoe hare, the groundhog, the skunk, the raccoon, the chipmunk and the Canadian beaver. Biodiversity of the estuary and gulf of Saint Lawrence River consists of an aquatic mammal wildlife, of which most goes upriver through the estuary and the Saguenay–St. Lawrence Marine Park until the Île d'Orléans (French for Orleans Island), such as the blue whale, the beluga, the minke whale and the harp seal (earless seal). Among the Nordic marine animals, there are two particularly important to cite: the walrus and the narwhal.