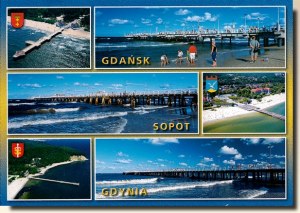 A postcard from Gdansk (Mirek)

Gdansk is Poland's principal seaport as well as the capital of the Pomeranian Voivodeship. It is also historically the largest city of the Kashubian region. The city is close to the former late medieval/modern boundary between West Slavic and Germanic lands and it has a complex political history with periods of Polish rule, periods of German rule, and extensive self-rule, with two spells as a free city. It has been part of modern Poland since 1945.