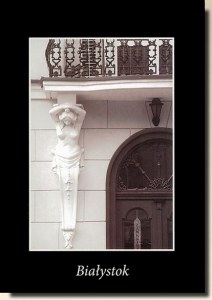 A postcard from Bialystok (Luaka)

Bialystok is the largest city in northeastern Poland and the second most densely populated city of the country. It is located near Poland's border with Belarus and is the capital of the Podlachia region. In 2006, its population was 294,830. From 1921 to 1998, it lay within Bia?ystok Voivodeship; since 1999, it has been the capital of Podlaskie Voivodeship [wikipedia].