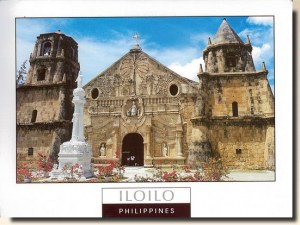 A postcard from Navotas (Rosa)

The Miag-ao Church was built in 1786 by Spanish Augustinian missionaries and was declared as part of the UNESCO World Heritage Site "Baroque Churches of the Philippines" in 1993. On the front facade, which is flanked by two watchtower belfries, one can see the unique blending of Spanish and native influences.