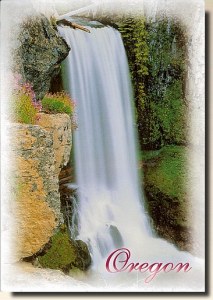 A postcard from Corvallis, OR (Sara)

The Deschutes River in central Oregon is a major tributary of the Columbia River. The river provides much of the drainage on the eastern side of the Cascade Range in Oregon, gathering many of the tributaries that descend from the eastern, drier flank of the mountains. It provided a major route to and from the Columbia for Native Americans and later pioneers on the Oregon Trail. It flows mostly through rugged and arid country, and its valley provides a cultural heart for central Oregon. Today the river provides irrigation and is popular in the summer for whitewater rafting and fishing.