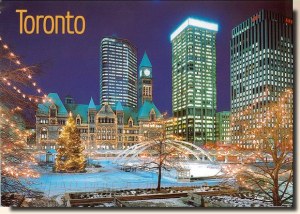 A postcard from Toronto (Corinne and Manu)

Holiday season lights up Nathan Phillips Square and Old City Hall. Toronto's Old City Hall was home to its city council from 1899 to 1966 and remains one of the city's most prominent structures. It is at the corner of Queen and Bay Streets, east of the new City Hall in the centre of downtown Toronto. It has a distinctive clock tower which heads the length of Bay Street from Front St. to Queen. The tower stands 104m tall (340 ft). The clock is the third largest in the world, with its face measuring 6 metres in diameter. The top four corners of the tower feature gargoyles.