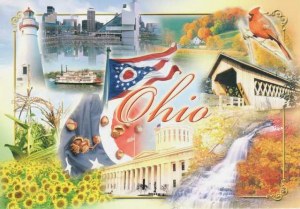 A postpostcard from University Heights (Amanda)

About this postcard
Ohio is an Eastern state in the Great Lakes region of the United States. The state's capital and largest city is Columbus. The state takes its name from the Ohio River. The name originated from the Iroquois word ohi-yo’, meaning "great river" or "large creek".Partitioned from the Northwest Territory, the state was admitted to the Union as the 17th state (and the first under the Northwest Ordinance) on March 1, 1803.Ohio is historically known as the "Buckeye State" after its Ohio buckeye trees, and Ohioans are also known as "Buckeyes".