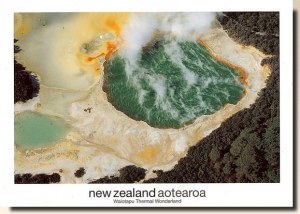 A postcard sending from Auckland (Maree)

Wai-O-Tapu (M?ori for "Sacred Waters") is an active geothermal area at the southern end of the Okataina Volcanic Centre, just north of the Reporoa caldera, in New Zealand's Taupo Volcanic Zone. The area has many hot springs noted for their colourful appearance, in addition to the Lady Knox Geyser. Prior to European occupation the area was the homeland of the Ngati Whaoa tribe who descended from those on the Arawa waka (canoe). The area also has a long history as a tourist attraction. While the area has been protected as a scenic reserve since 1931, a tourist operation occupies part of the reserve under a concession. It operates under the name "Wai-O-Tapu Thermal Wonderland".