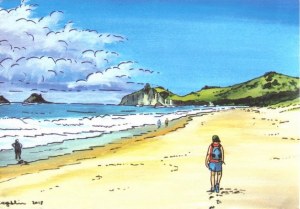 A postcard from Paraparaumu (Aunty)

Paraparaumu is a town in the south-western North Island of New Zealand. Like other towns in the area, it has a partner settlement at the coast called Paraparaumu Beach, which lies directly opposite Kapiti Island. Paraparaumu means "scraps from an earth oven" in Māori 'parapara' means dirt or scraps and 'umu' means Oven.