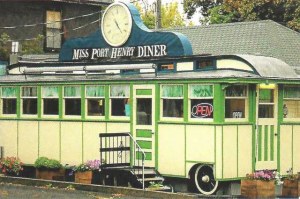 About this postcard
Port Henry is a hamlet in Essex County, New York, United States. Port Henry is in a tract of land set aside by the British Crown for veterans of the Seven Years' War (also known as the French and Indian War). Although a mill was built in 1765, no other European-American settlers arrived until 1785, after the American Revolutionary War. The Iroquoian-speaking Mohawk and Oswegatchie, members of the Seven Nations of Canada, were still living in the town until after 1800. Most of the Iroquois from the territory of New York had been resettled in Canada, forced out of New York and the United States due to their alliance with the British during the war. In the early years, timber harvesting was a major industry and 20 mills were located in the area. The first dock was built on Lake Champlain by 1820 for shipping lumber to other ports.