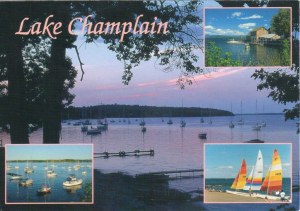 About this postcard
Lake Champlain is a natural freshwater lake in North America mainly within the borders of the United States (in the states of Vermont and New York) but partially situated across the Canada–U.S. border, in the Canadian province of Quebec. The New York portion of the Champlain Valley includes the eastern portions of Clinton County and Essex County. Most of this area is part of the Adirondack Park. There are recreational opportunities in the park and along the relatively undeveloped coastline of Lake Champlain.