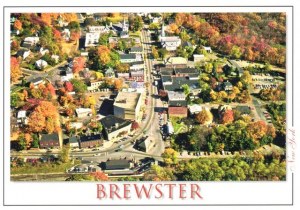 A postcard from Brewster, NY (Rob)

Brewster is a village within the town of Southeast, New York in Putnam County, United States. Its population was 2,390 at the 2010 census. The village is the most densely populated portion of the town. The village is named for two early farmer landowners, Walter and James Brewster.