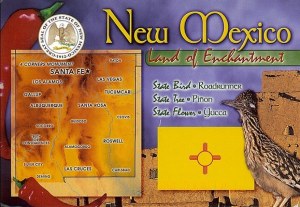 A postcard from La Joya (Sam-Quito)

New Mexico is a state located in the southwest and western regions of the United States. New Mexico is also usually considered one of the Mountain States. The tribes in the state consist of mostly Navajo and Pueblo peoples. As a result, the demographics and culture of the state are unique for their strong Hispanic and Native American influences. The flag of New Mexico is represented by the red and gold colors, which represent Spain as well as theZia symbol, an ancient Native American symbol for the sun.