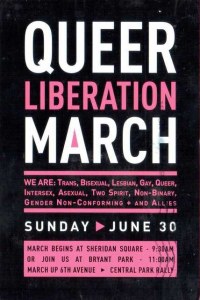 About this postcard
The Queer Liberation March was an LGBT protest march in Manhattan held June 30, 2019, coinciding with WorldPride NYC, which marked the 50th anniversary of the Stonewall riots, widely considered a watershed moment in the modern gay rights movement. There has been a large annual march and parade in New York City since 1970, produced by the nonprofit Heritage of Pride organization since 1984. The Queer Liberation March was created in protest of the corporate-focused sponsorship and participation requirements of that larger march, resulting in dueling Manhattan LGBTQ marches on the same day. The march proceeded uptown on Sixth Avenue in Manhattan, following the path of the first one, which in 1970 marked the one-year anniversary of the Stonewall Riots and was organized by the Christopher Street Liberation Day Committee. The Queer Liberation March proceeded in the opposite direction of the New York City Pride March, which courses downtown on Fifth Avenue through most of its route.