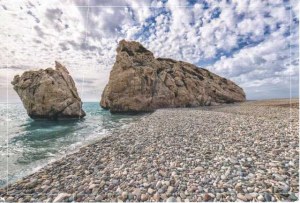 About this postcard
Petra tou Romiou ("Rock of the "Roman"), also known as Aphrodite's Rock, is a sea stack in Paphos, Cyprus. It is located off the shore along the main road from Paphos to Limassol. The combination of the beauty of the area and its status in mythology as the birthplace of Aphrodite makes it a popular tourist location. According to one legend, this rock is the site of the birth of the goddess Aphrodite, perhaps owing to the foaming waters around the rock fragments, and for this reason it is known as Aphrodite's Rock. Gaia (Mother Earth) asked one of her sons, Cronus, to mutilate his father, Uranus (Sky). Cronus cut off Uranus' testicles and threw them into the sea.