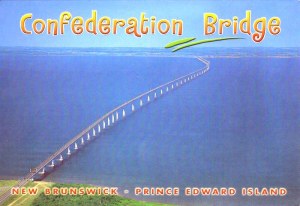 About this postcard
The Confederation Bridge is a box girder bridge carrying the Trans-Canada Highway across the Abegweit Passage of the Northumberland Strait, linking the province of Prince Edward Island with the province of New Brunswick on the mainland. Opened May 31, 1997, the 12.9-kilometre (8.0 mi) bridge is Canada's longest bridge and the world's longest bridge over ice-covered water. Construction took place from October 1993 to May 1997 and cost C$1.3 billion. Before its official naming, Prince Edward Islanders often referred to the bridge as the "Fixed Link". It officially opened to traffic on May 31, 1997. In April 2022, the PEI legislature voted unanimously in favour of renaming the bridge to "Epekwitk Crossing", whereas Epekwitk is the traditional Mi'kmaq name for Prince Edward Island. The name change would need to be approved by the Canadian federal government in order to take effect.