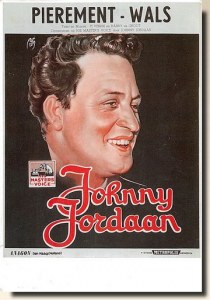 A postcard from Leiden (Laura)

Johnny Jordaan was the pseudonym for Johannes Hendricus van Musscher (7 February 1924 - 8 January 1989) a Dutch folk singer. He was well known for his songs about the city of Amsterdam, especially the Jordaan district. His most famous song is "Geef mij maar Amsterdam" (I prefer Amsterdam). A small part of the song was featured in Friends episode "The one with all the football", where Joey and Chandler are competing for a Dutch girl.