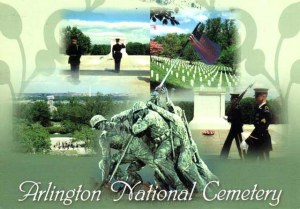 A postcard from Boston, MA (Caitlyn)

About this postcard
Arlington National Cemetery is a United States military cemetery in Arlington County, Virginia, across the Potomac River from Washington, D.C., in whose 624 acres (253 ha) the dead of the nation's conflicts have been buried, beginning with the Civil War, as well as reinterred dead from earlier wars. The United States Department of the Army, a component of the United States Department of Defense (DoD), controls the cemetery. The national cemetery was established during the Civil War on the grounds of Arlington House, which had been the estate of the family of Confederate general Robert E. Lee's wife Mary Anna (Custis) Lee.