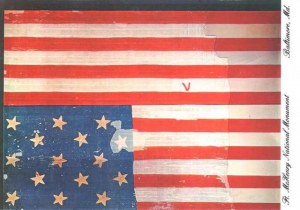 A postcard from Baltimore (Bodi)

About this postcard
The Star-Spangled Banner, or the Great Garrison Flag, was the garrison flag that flew over Fort McHenry in Baltimore Harbor during the naval portion of the Battle of Baltimore during the War of 1812. Seeing the flag during the battle inspired Francis Scott Key to write the poem "Defence of Fort M'Henry", which, retitled with the flag's name from the closing lines of the first stanza and set to the tune of "To Anacreon in Heaven" by John Stafford Smith, later became the national anthem of the United States.