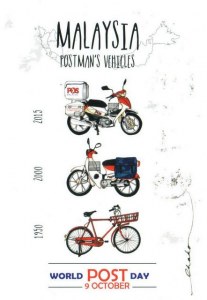 A postcard from Seremban (Pui)

About this postcard
A mail carrier, mailman, mailwoman, postal carrier, postman, postwoman, or letter carrier (in American English), sometimes colloquially known as a postie (in Australia, New Zealand, Scotland, and other parts of the United Kingdom), is an employee of a post office or postal service, who delivers mail and parcel post to residences and businesses. The term "mail carrier" came to be used as a gender-neutral substitute for "mailman" soon after women began performing the job. In the Royal Mail, the official name changed from "letter carrier" to "postman" in 1883, and "postwoman" has also been used for many years.