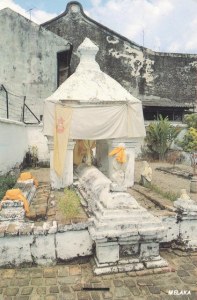 A postcard from Melaka (Libby)

Hang Jebat was the closest companion of the legendary Melakan hero Hang Tuah. Regarded in Malaysia as one of the greatest silat exponents in history, he is well known for his vengeful rebellion against the Malacca Sultan whom he served. He can also be regarded as an early Malay anarchist following his rebellion against the ruler.