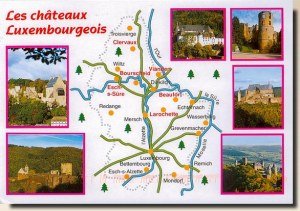 A postcard from Munshausen (Diane)

Munshausen is situated in the north-eastern part of Luxembourg. Communes around are Hosingen in the south, Kiischpelt and Eschweiler in the southwest, Clervaux in the north-west and Heinerscheid in the north. In the east, the river Our forms a natural boundary to Germany. Munshausen is part of the Oesling, the Luxembourgish part of the Ardennes. The landscape is composed of free plateaus at an average altitude of 1650 ft, cut by several narrow riverbeds. The axis Hosingen-Heinerscheid, passing through Marnach, is the dividing line between the basins of the river Clerve in the west and the river Our in the east.