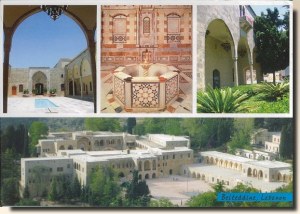 A postcard from Beirut (Mireille)

Beirut is the capital and largest city of Lebanon with a population ranging from some 1 million to more than 2 million as of 2007. Located on a peninsula at the midpoint of Lebanon's coastline with the Mediterranean, it serves as the country's largest and main seaport, and also forms the Beirut Metropolitan Area, which consists of the city and its suburbs. The first mention of this metropolis is found in the ancient Egyptian Tell el Amarna letters, dating to the 15th century BC, and the city has been continuously inhabited since.