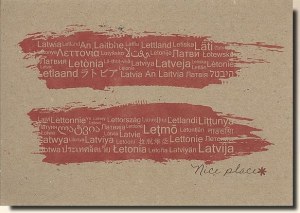 A postcard from Jelgava (Sandra)

Jelgava is a town in central Latvia about 41 km southwest of Riga with about 64 thousand inhabitants. It is the largest town in the region of Zemgale. Jelgava is known as the former capital of the Duchy of Courland, and was the capital of the Courland Governorate until 1919. Jelgava is situated on a fertile plain rising only 3.5 metres (11.48 ft) above sea level on the right bank of the river Lielupe. At high water the plain and sometimes the town as well can be inundated. It is a railway center and is also host to Jelgava air base. Its importance as a railway centre can be proven by the fact that it lies at the junction of over 6 railway lines connecting Riga to Lithuania, eastern and western Latvia, and Lithuania to the Baltic sea.