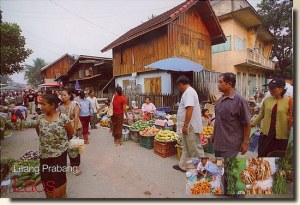 A postcard from Luang Prabang

Muang Sua was the old name of Luang Prabang following its conquest in 698 A.D. by a Tai prince, Khun Lo, who seized his opportunity when Nan-chao was engaged elsewhere. Khun Lo had been awarded the town by his father, Khun Borom, who is associated with the Lao legend of the creation of the world, which the Lao share with the Shan and other peoples of the region. Khun Lo established a dynasty whose fifteen rulers reigned over an independent Muang Sua for the better part of a century.