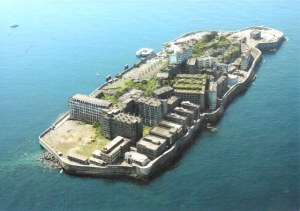 A postcard from Hashima Island (Akiko)

Hashima Island, commonly called Gunkanjima (meaning Battleship Island), is an abandoned island lying about 15 kilometers (9 miles) from the city of Nagasaki. The island was known for its undersea coal mines, established in 1887, which operated during theindustrialization of Japan. The mine was closed in 1974, and all the residents left the island soon after. Due to lack of maintenance several buildings have collapsed since, and other buildings are subject to breakage. However, certain collapsed exterior walls have been restored.