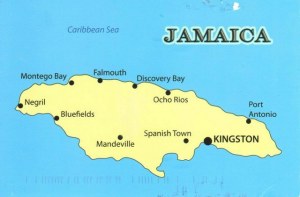 A postcard from Jamaica (The Austins)

Christopher Columbus claimed Jamaica for Spain after landing there in 1494 and his probable landing point was Dry Harbour, now called Discovery Bay.There is some debate as to whether he landed in St. Ann's Bay or in Discovery Bay. St. Ann's Bay was named "Saint Gloria" by Columbus, as the first sighting of the land.