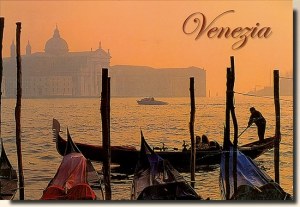 A postcard from Venice (Susanna)

Venice is a city in northern Italy known both for tourism and for industry, and is the capital of the region Veneto. The name is derived from the ancient people of Veneti that inhabited the region as of 10th century B.C. The city historically was the capital of the Venetian Republic. Venice has been known as the "La Dominante", "Serenissima", "Queen of the Adriatic", "City of Water", "City of Masks", "City of Bridges", "The Floating City", and "City of Canals". Luigi Barzini, writing in The New York Times, described it as "undoubtedly the most beautiful city built by man". Venice has also been described by the Times Online as being one of Europe's most romantic cities.