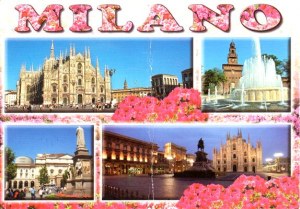 A postcard from Milan (Les 2 bombasses)

Milan is the second-largest city in Italy and the capital of Lombardy. The massive suburban sprawl that followed the Italian economic miracle of 1950s–60s and the growth of a vast commuter belt, suggest that socioeconomic linkages have expanded well beyond the boundaries of its administrative limits and its agglomeration, creating a metropolitan area of 7-9[ million people. It has been suggested that the Milan metropolitan area is part of the so-called Blue Banana, the area of Europe with the highest population and industrial density.