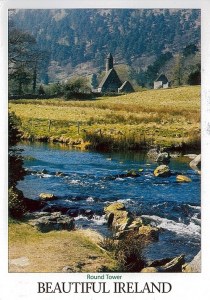 A postcard from Farranfore (Julia)

Irish round towers (Irish: Cloigtheach (singular), Cloigthithe (plural) – literally "bell house") are early medieval stone towers of a type found mainly in Ireland, with three in Scotland and one on the Isle of Man. Though there is no certain agreement as to their purpose, it is thought they were principally bell towers, places of refuge, or a combination of these. Generally found in the vicinity of a church or monastery, the door of the tower faces the west doorway of the church. In this way it has been possible to determine without excavation the approximate site of lost churches, where the tower still exists.