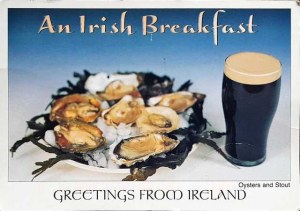 A postcard from Castlebar (Deborah)

About this postcard
Oysters have had a long association with stout. When stouts were emerging in the 18th century, oysters were a commonplace food often served in public houses and taverns. By the 20th century, oyster beds were in decline, and stout had given way to pale ale. Ernest Barnes came up with the idea of combining oysters with stout using an oyster concentrate made by Thyrodone Development Ltd. in Bluff, New Zealand, where he was factory manager. It was first sold by the Dunedin Brewery Company in New Zealand in 1938, with the Hammerton Brewery in London, UK, beginning production using the same formula the following year. Hammerton Brewery was re-established in 2014 and is once again brewing an oyster stout. Modern oyster stouts may be made with a handful of oysters in the barrel, hence the warning by one establishment, the Porterhouse Brewery in Dublin, that their award-winning Oyster Stout was not suitable for vegetarians. Others, such as Marston's Oyster Stout, use the name with the implication that the beer would be suitable for drinking with oysters.