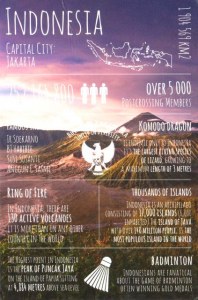 A postcard from Kota Bogor (Saumi)

About this postcard
The volcanoes in Indonesia are among the most active of the Pacific Ring of Fire. They are formed due to subduction zones of three main active tectonic plates namely the Eurasian Plate, Pacific Plate, and the Indo-Australian Plate. Some of the volcanoes are notable for their eruptions, for instance, Krakatau for its global effects in 1883, Lake Toba for its supervolcanic eruption estimated to have occurred 74,000 BP, which was responsible for six years of volcanic winter, and Mount Tambora for the most violent eruption in recorded history in 1815. The eruption of Mount Tambora in 1815 caused widespread harvest failures in Northern Europe, the Northeastern United States, and eastern Canada in 1816, which was known as the Year Without a Summer.