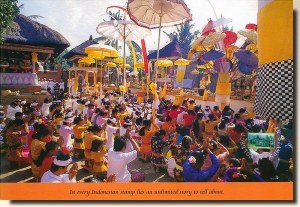 A postcard from Jakarta (Vania)

Bali is an Indonesian island, lying between Java to the west and Lombok to the east. It is one of the country's 33 provinces with the provincial capital at Denpasar towards the south of the island. With a population recorded as 3,551,000 in 2009, the island is home to the vast majority of Indonesia's small Hindu minority. About 93.18% of Bali's population adheres to Balinese Hinduism, while most of the remainder follow Islam. It is also the largest tourist destination in the country and is renowned for its highly developed arts, including dance, sculpture, painting, leather, metalworking and music.